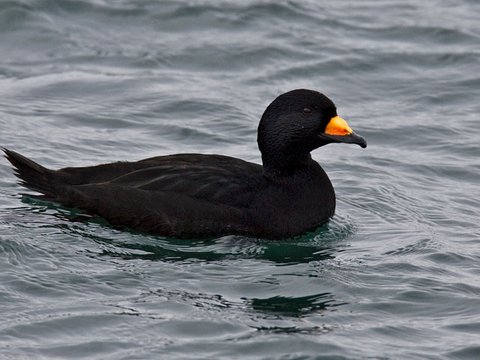 If you were out at the lake this week, you may have spotted a large group of black birds swimming in circles together in the middle of the lake. These are Black Scoters.  They often appear on Lake Iroquois in late October as they migrate south and east to the Atlantic coast.  Nicknamed “Halloween birds” by Chip Wright due to the male colors- black body with orange beak - and their appearance here right around the end of October.  Black Scoters are sea ducks, spending their summers in Arctic regions and migrating south to winter along the mid-Atlantic coast.  They will briefly stop off to rest on inland freshwater lakes and ponds during migration.  They feed on insects and small mollusks and crustaceans.  Because Black Scoters nest in the very far north, it is difficult to estimate their population, but according to the Cornell University Ornithology Lab, it is believed that their numbers are declining, and they are considered “near endangered”.  While they usually spend only a day or two on our lake each fall, they are always interesting and fun to see.