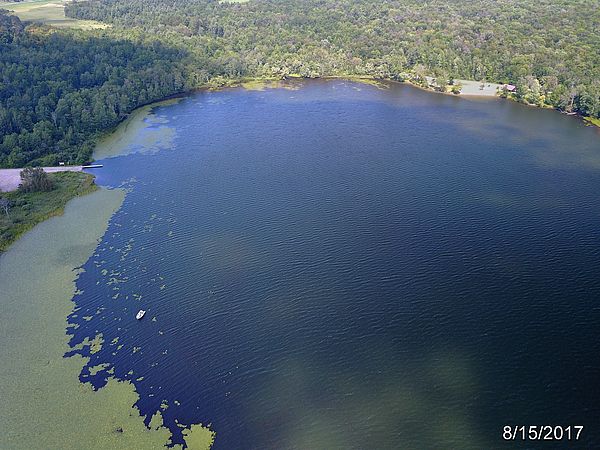 I am writing in response to Meg Handler’s letter that appeared in your August 20 edition. As the President of the Lake Iroquois Association (LIA), I feel it necessary to provide a more realistic, data-based report on the milfoil infestation in Lake Iroquois.

Contrary to the position taken in the letter, there continues to be a serious infestation of Eurasian Watermilfoil (EWM) in Lake Iroquois this year. It certainly does not appear to have decreased. Some individuals have reported observing thick stands of EWM in areas of the lake not previously observed.  While milfoil has surfaced in some places, dense surface mats haven’t formed as prominently this year compared to some previous years.  This is neither unusual nor something to become complacent about.  There will be some variation from year to year in growth patterns and density of surface matting.  However, the infestation remains quite dense and appears to continue its spread.

The letter also suggests the milfoil is not pressuring native aquatic plant species. It is difficult at best to understand this without performing an aquatic plant survey. In support of sound science, the LIA has consistently funded aquatic plant surveys conducted by the Darrin Freshwater Institute, an independent scientific organization.  We know from these surveys that the milfoil is, in fact, squeezing out native plant populations.  All of the survey reports are available on our website: https://www.lakeiroquois.org/water/plant-surveys . Behavioral studies of invasives show there is no reason to think this pattern will not continue. It is a slow process. Native species do not disappear all at once, however, it is often the outcome.  Eurasian Watermilfoil has no natural predators or limitations in this environment.  This aquatic invasive species will continue to spread and likely will continue to outcompete native species.  Native species loss is far from trivial, and can have a domino effect on the lake ecosystem.  Milfoil provides neither food nor habitat for native animal species. Its continued presence in very dense stands can lead to fewer and fewer areas of the lake supportive of native fish and amphibian species.  As the milfoil continues to spread native flora and fauna become reduced or simply disappear.  This can be gradual, and as stewards of this precious resource, we believe it is our responsibility to do what we can to prevent this from happening.

Beyond milfoil, Lake water quality is improving based on the Vermont Department of Environmental Conservation’s (VT DEC) Lake Scorecard (available at: https://www.lakeiroquois.org/water/lake-data-maps). Due to the hard work of LIA volunteers for over 40 years, the Lake continues to see a highly significant decrease in Lake phosphorus levels and incremental improvements in sediment loading thus improving water clarity.  The LIA is also continuing its work to reduce and control the milfoil infestation.  In March, we submitted an application for an Aquatic Nuisance Control permit with the VT DEC to allow a very low dose application of the herbicide ProcellaCOR on 40% of the lake as part of an integrated pest management plan that accompanied the submittal (available at: https://www.lakeiroquois.org/invasives/milfoil-control-efforts).  As of this date, the permit is still under review by the VT DEC. Normally, the LIA would also conduct Diver Assisted Suction Harvesting (DASH) to clear some of the busy boating areas to reduce milfoil fragmentation and spread. However, due to the COVID pandemic, the boat crews are not able to work this summer.  We have been able to continue our greeter program and our education and outreach efforts to lake users to encourage best practices to reduce the spread of the milfoil and to prevent other invasive species from entering the lake.

Overall, the milfoil infestation continues to be a serious problem in Lake Iroquois. It remains a real threat to the lake ecosystem; one that would be folly to ignore. Invasive species do not "balance out".  They are opportunistic and will continue to spread and multiply until they overwhelm an environment in which they have no natural predators or limitations.  Consider for example the LaPlatte Headwaters Town Forest in Hinesburg, Vermont, where herbicide treatment enters its second year to address infestations of buchthorn, honeysuckle, and Japanese barberry (https://frontporchforum.com/areas/122/issues/4158). Or our sister watershed group, the Lewis Creek Association, which has engaged in a great deal of hard work to control Yellow Iris in Thorp Brook and Lower Lewis Creek using foliar herbicides (https://www.lewiscreek.org/press-releases-and-news/2019/9/3/yellow-iris-control-in-thorp-brook-and-lower-lewis-creek). These and other efforts stand as excellent examples of choosing not to ignore the problem or engaging in wishful thinking. The suggestion that somehow the milfoil has magically stopped spreading or will disappear in the absence of intervention is an ineffective approach.  It will not solve the problem, nor will it mitigate against serious, long-term damage to the ecosystem.  Only the kind of sustained, consistent evidence-based work the LIA continues to be engaged in will reduce and control this invasive and ensure the continued health and viability of Lake Iroquois.

Lake Iroquois is lovely and healthy in many respects. We have enjoyed seeing our loon family grow and watching the eagles, osprey, geese, and gulls fish for their prey. Yet, we cannot become complacent and pretend that all is well when we know and can see that below the surface this noxious invasive lurks, continuing to spread and endangering our beautiful lake.