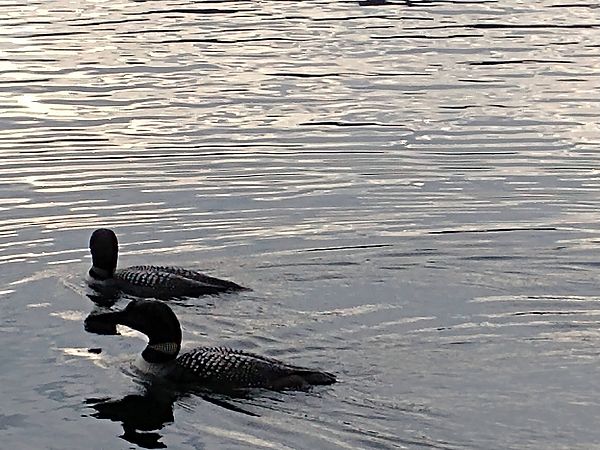 We are happy to report that the loons have once again returned to Lake Iroquois.  The first recorded spotting of the loons was on April 18 and by April 25 they were seen on the nest. Jack Linn, of the LIA Board, and Eric Hansen, of the Vermont Loon Conservation Project, were on the lake early in April to set up the nesting platform and Jack and Chip Wright have placed the warning signs to protect the nesting area. This is the earliest date for nesting that we have recorded for Lake Iroquois. Loons were first observed attempting to nest here in 2016 on the island but they abandoned that nest. The next two years, 2017 and 2018, they attempted to nest but were also unsuccessful. Finally, in 2019, with the placement of the nesting platform, they were able to nest and successfully hatched and raised two chicks. 2020 was also a successful year with two more chicks hatched and raised. We are hopeful that once again we will have the pleasure of watching our loon family on the lake this summer.   Enjoy watching these interesting creatures as they raise their family but remember to keep your distance as they are easily disturbed when people get too close.  Many thanks to Jack Linn, Eric Hansen, and Chip Wright for maintaining the nesting platform and placing the signs; thanks to Chip also for maintaining the nesting records, and to Jamie Carroll for maintaining the loon watch spreadsheet; and finally, many thanks to the folks around the lake who are recording sightings as part of the loon watch effort. *